‘Trien, where has your smile gone?’
After three days of Iran, my much promised land, I suddenly realised that since crossing the border in Noorduz I have laughed little or not at all.

Where I usually cheerfully wave to everybody, loudly shout the local ‘hello’ or smile, I have now remained silent. Silent from my mouth, silent in my heart.

Welcome in Iran. The country that surprised me already in the first kilometres with stunning scenery. Although I rode into the wrong direction Aras Valley was a nice consolation prize #Iran

Waking up in snow, pedalling in snow #Iran 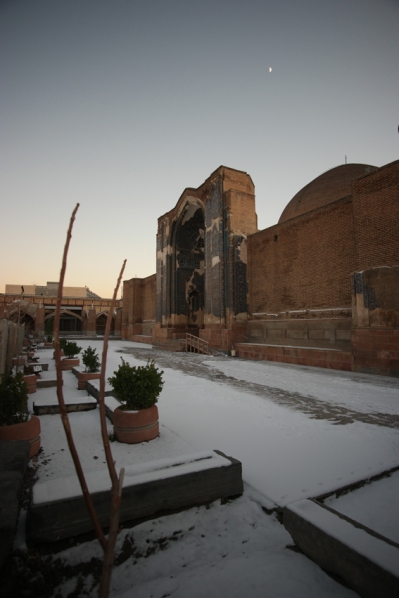 Iran, my promised land, the land of unrivaled hospitality, overwhelming nature, ancient culture. Of majestic mosques and an abundance of fruit, nuts and dates that are so well-loved. That country was not what I had expected. 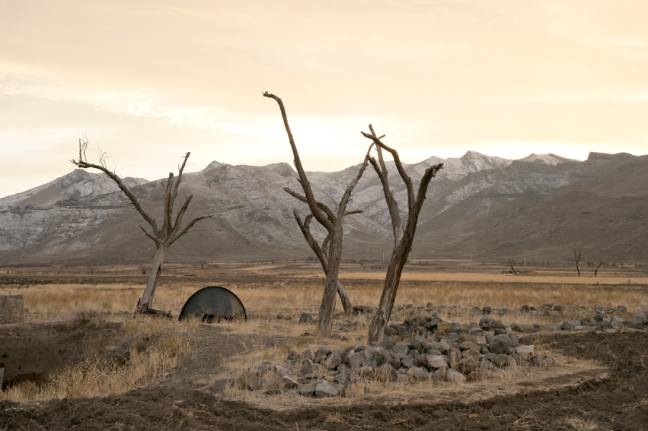 December is cocooning month. Days are short and outside it’s freezing cold. So after watching the most lovely sunset, your tent is the most appropriate place in between 6 pm and 8 am. Goodnight #Iran

Since last September a fatwa was proclaimed forbidding cycling for women. Was that the cause? Was that the reason why I was ignored or watched disapprovingly? That fatwa was just intended for locals, not for tourists, right? 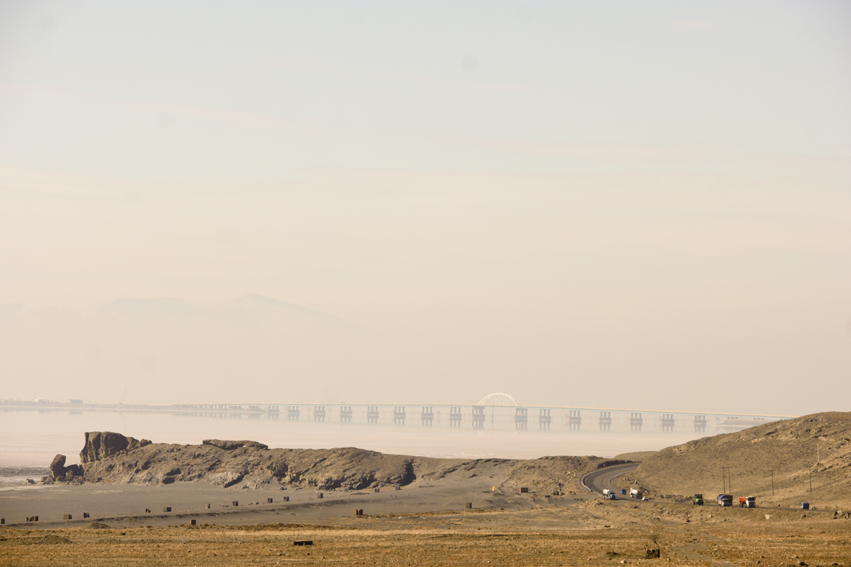 Crossing another salt lake. This time not by pushing my bike and carrying my luggage for kilometres and hours, but by rolling over a fairly busy asphalt road. Despite the traffic, the views were great #LakeUrmia #Iran

Iran is too big to cycle all the way with my tourist visa, even when extended. So I took a 19 hour bus from Urmia to Isfahan. I was hosted by the most friendly Mohammad of Iran, whom I met in Georgia. He and his friend Bahram became my personal guides and party friends in this beautiful city. They showed me also this Naghsh-e Jahan Square, one of the largest city squares in the world #Iran 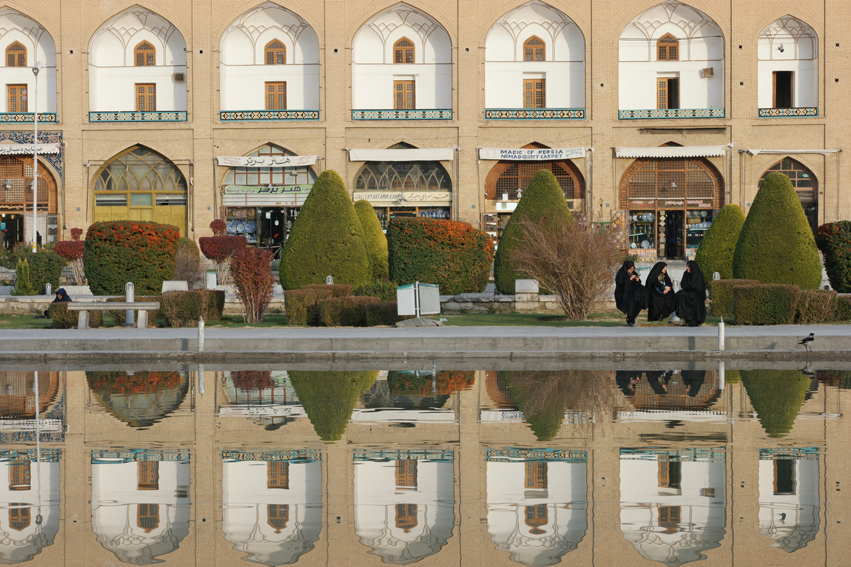 Or was it me? I didn’t know what attitude to adopt and I cycled on the road all tense. I felt caught, isolated, both by hijab and dress and through my ignorance of the Farsi. Not only the alphabet is different, the figures as well. No one en route spoke English but that actually may not be a problem.

I felt not at all welcome. Even if on the first day, the police alleged the opposite. Up to eight times I had to stop and show my passport, followed by the words ‘welcome in Iran’. 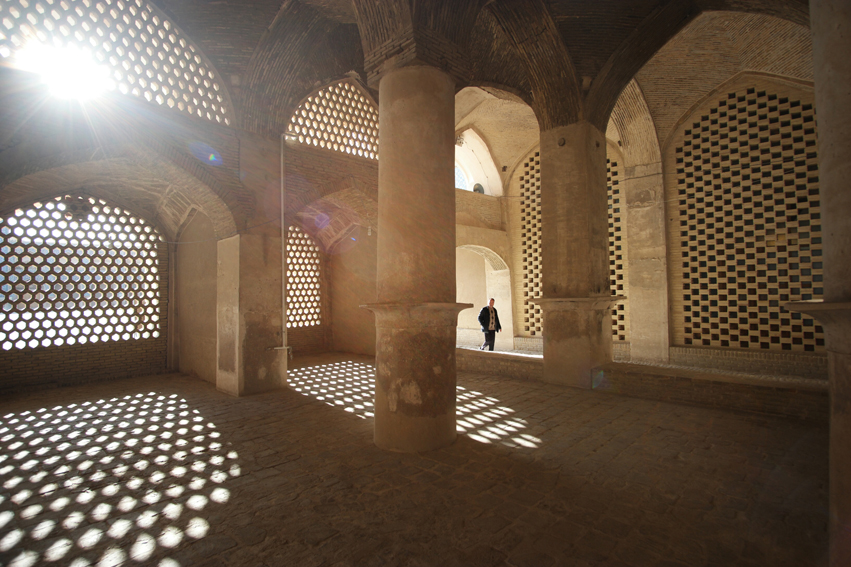 In Isfahan you have 5 beautiful old bridges from the Safavid period and therefore. Unfortunately the river dried up. But the good thing is, it became a meeting point for locals. Musicians are gathering to sing or play, youngsters are making small fires or are just hanging around. It feels always good to see cyclists in a country #Iran

When leaving the city to start some desert adventure I stopped at a bike repair shop. Immediately this cute kid cycled towards me, checked my bike and showed his. He was incredibly proud when I offered him a WWF-tattoo. #Isfahan #Iran

I smiled thanks to the nice encounter with my couchsurf host Nassim in Urmia. I was able to communicate. Merriment! She told me how much she hates the hijab (you too?) and how horrible she finds that woman in Iran are suppressed (for sure). She told about her resulting two-year depression and the hope of emigration (fingers crossed).

The nice thing about cycling off the beaten track is you bump into villages were bath, bed and watering can are just there waiting for you. Strange though, I did use deodorant in the morning #Iran 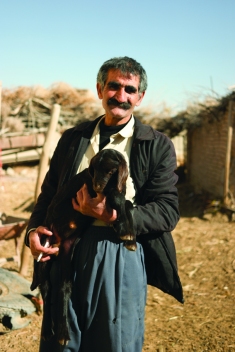 A sweet farmer surprised by seeing me in his abandoned village. Showed me his livestock and invited me for tea and biscuit. Memorable encounters for sure #Iran 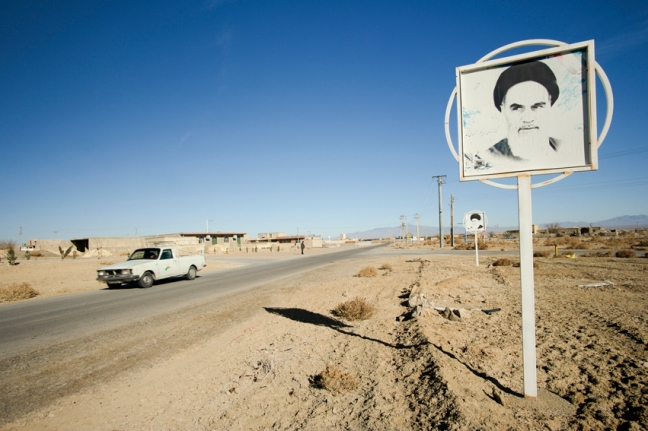 A man that (unfortunately) doesn’t need any introduction, omnipresent, even in the smallest villages #Khomeini #Iran

I smiled thanks to the reunion with Mohammad and Bahram in Isfahan and the fun days I’ve spent with them. From an ‘underground’ birthday party, visit to the family, falafel on the go to a visit to many cultural heritage sites. Iranian beauty and hospitality galore! 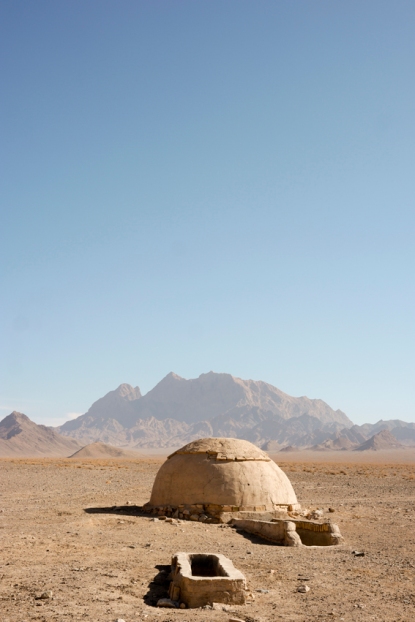 Pir-e Sabz, also called Chak-Chak, is situated in Yazd region. It’s located in a shallow cave on the side of a barren mountain. The pir is the most sacred of the mountain shrines of Zoroastrianism #Iran

View into the valley #ChakChak #Iran 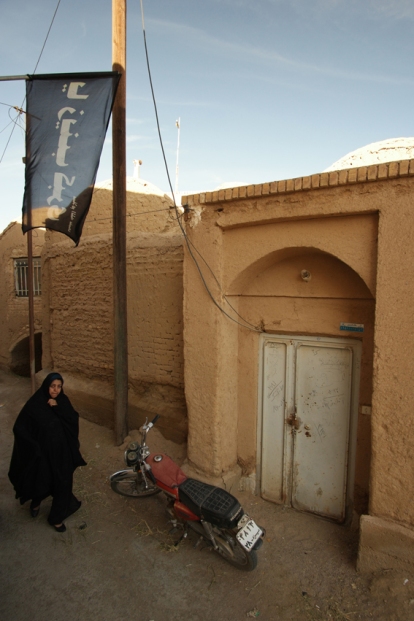 Although you have the most wonderful, fairylike cities in Iran, I prefer the countryside. Trying to communicate with locals, helping a bit on the field or just sitting there and enjoying the landscape or life around. Here in lovely, crumbling mud-brick, desert village Kharanaq, said to be more than 1000 years old, where farmers grow yellow carrots #Iran

I smiled thanks to small encounters on the way, sometimes by a lonely sweet farmer, then an enthusiastic chappie on a bike or a man who invited me for a hot tea when I cycled through the snow. 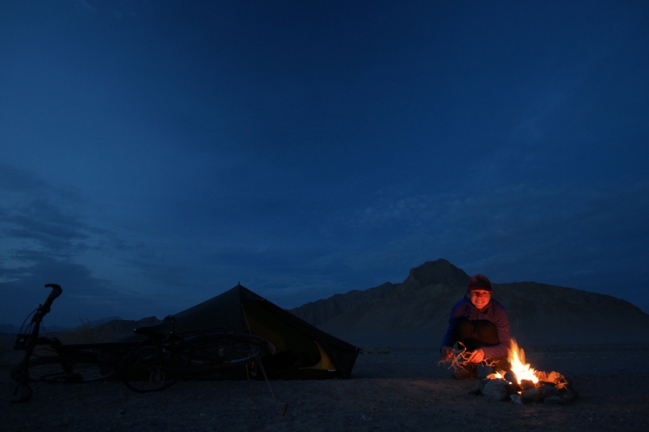 I didn’t feel the warmth of my family this Christmas but instead my small campfire did a good job. There was plenty of space for all of you, but nobody showed up #Iran

December 28th, the Day of the Innocent Children. I entered a boys school in Meybod. I checked if I could take a picture. By seeing the camera the boys became instantly wild. They started shouting, screaming, pulling and pushing just to be on the first row. Hilarious! Here already a bit tempered because while the school bell rang the director appeared and stopped this funny (picture) play time. Only a few diehards neglected him #Iran

I smiled less at the many asphalt roads, the traffic, the rushing trucks, the giant distances and my endless quest for unpaved terrain. Even Google Earth often couldn’t help me.

I smiled less through the daily, countless cars along the way that awaited me or followed. To ask me where I come from and where I am cycling to. Even though it was well intended.

You can follow maps, main roads, side roads, tourist guides… or you can follow your nose, eyes, heart or just some truck trails in the sand not knowing where they’re leading to. Hoping they’ll bring you to a nice destination in the good direction. And they did… suddenly I saw this. ‘Badgirs’ foreshadowing a big ghost village. Badgirs are windtowers or wind catchers, let’s say, the current aircon. Ancient systems designed to catch even the lightest breeze and direct it to the rooms below. Ingenious! #Iran 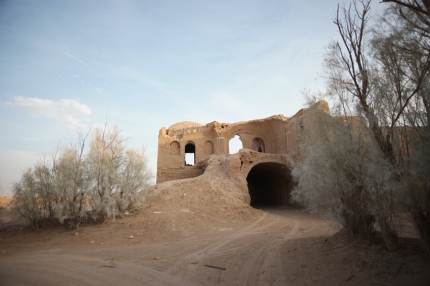 I didn’t smile at pursuits of guys on motorcycles, riding next to you, starting to grope, turning around and repeating the same action, up to three times.

I didn’t smile at questions of being together on the photo and the sudden feel of a stranger’s hand on your breast.

saw this little kid in one of those beautiful alleys of Yazd. He was pushing, with his tongue out of his mouth and each meter stopping to catch his breath, an excessive loaded wheelbarrow. Worth a picture I thought but meanwhile realising offering some help would be more appreciated. He didn’t understand the situation but found it just great and funny. With a big smile he was leading me towards his house. The last tiny stretch down I left him. Here smiling me goodbye #Iran

Time to change the word ‘tea’ into ‘chai’ #Iran 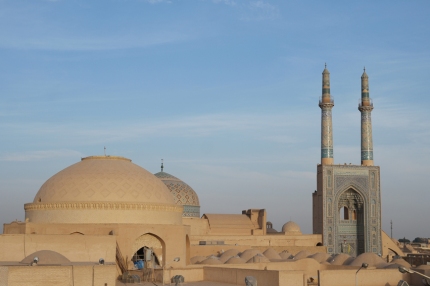 View from the rooftop terrace of the hostel #Yazd #Iran

I didn’t smile at all when I was followed by a tough guy on a motorcycle. Who pulled me off my bike, tried to throw me in a sandpit next to the road and tried to rape and murder me.

No. I cried, I was empty, exhausted and felt enormously misunderstood. Because, ‘Well, in each country you do have bad people anyway’ it sounded. ‘Uh yes, but three incidents in four cycling days… Sorry, that, I never saw before.’ And ‘Iran has good people. What you say isn’t possible, you are lying, how dare you!’ and ‘Hey, rejoice, you are still alive nevertheless, look at the positive side!’.

Yes, of course, that I tried. I was super grateful that I could escape. That, when I was dragged by my ankles through the sand, I could loosen a foot and kick that guy in his balls, chest and chin and run away.

A sweet farmer, again… Living in the most beautiful, neglected old fortress. He whispered to me, probably thinking that like that, I could understand his Farsi better #Iran

But it has been enough. I no longer dared to walk in the streets, the slightest moped sound gave me goose bumps and a faster heartbeat. I looked behind me constantly and checked if I haven’t been followed. Paranoia rules!

Hours I was on the line with my sister Griet. What would I have done without her? A ‘thank you sweet sister’ does not cover how grateful I am!

Hours I’ve spent on the Facebook page of ‘Bicycle travelling women’ where I read that I, as solo cycling woman in Iran, wasn’t the only one with bad experiences.

Hours I tried to reminisce good memories of the country but my negative experiences, which followed one another too short after each other, unfortunately prevailed.

Persepolis was the ceremonial capital of the Achaemenid Empire (ca. 550–330 BC), worth a stop I thought #Iran

The most wonderful man of Iran lives in Marvdasht (near Persepolis) and is married with a sweet Greek lady. I wanted to camp next to Persepolis, he came towards me, big smile on his warm face included. Asking if I didn’t want to camp in the garden of the hotel he was working in. First I said ‘no thank you’, but after a while, feeling insecure after what happened the last days, I said yes. I pitched my tent in the garden of that fancy hotel. The man asked if I wanted to take a shower and have some food (all for free). Again, I said ‘no thank you’. Half an hour later, the manager was there. I couldn’t stay there, it wasn’t allowed for security reasons. So the sweet man asked the gardener to bring me to his house where his wife took care of me, offered me tea, a shower and a bed to sleep in. The warmest encounter I had in Iran was definitely in Marvdasht. Especially after two ‘cold’ days. What I didn’t know was that after this beautiful encounter I had the worst one a couple of hours later #Iran

Not only in all those dazzling mosques that Iran has to offer, but also on my skin. Bruising became purple, green, yellow. Yellow went away.
And so have I: I have gone away from Iran, my much promised land.
To Oman. To a new country, a new ‘climate’ with new people. And to something new. But that, I keep for next time.

My last try to have a good souvenir of Iran was by going to Qeshm island. Unfortunately also this attempt turned out into a big escape towards Oman #StarsValley #Iran

We are now 2 months on. I feel good, Oman does good. Correction: Oman does great!
___
It’s not its people, but the system, the so distorted system that makes some men as they are not supposed to be … So I want to warn all solo cycling women with Iran plans. Forewarned is forearmed, isn’t it?

___
Many thanks to Jan Schelstraete, who helped me out through this blogpost with his big red pencil.